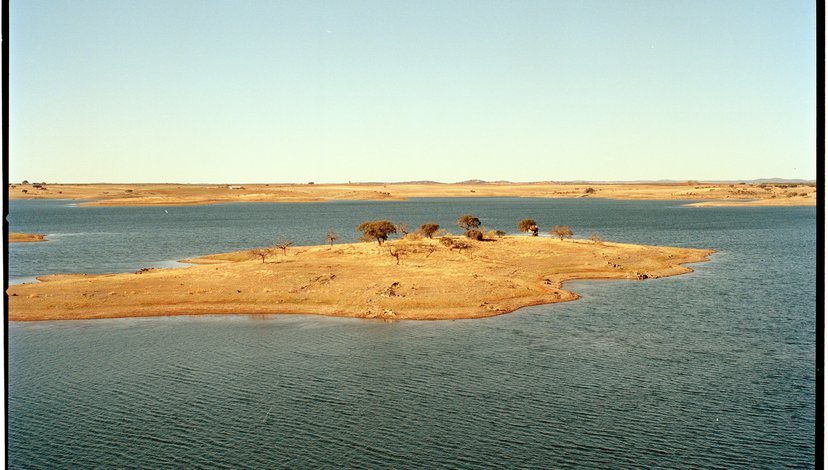 The flooding of the Alqueva basin. Yannis Drakoulidis, 2017

Liquid Deserts investigates the environmental impacts of intensive agriculture in Alentejo. This rural region in the south of Portugal, where modes of life are deeply rooted in human-soil relations, will provide a lens to unpack the entangled relation between the ongoing desertification of the western Mediterranean basin and irrigated monocrop cultivation. Focusing on the large-scale hydroelectric project of the Alqueva dam, we will explore the inherent contradictions of the so-called European Green Deal, namely the conflict between the modernisation of agricultural practices and the protection of habitats and landscapes.

We will make use of the tools and methods of environmental architecture to trace the different scales of extractivism at stake – resource exhaustion, environmental contamination, exploitation of migrant labour – and research and design alternatives to the development model that is being implemented with the dam. In collaboration with local activist movements, who have voiced the concerns and complaints of populations and workers, the output of our collective research will be a spatial investigation into the logistical conditions and environmental consequences of the neoliberal model of super-intensive farming.

The studio will frame the undergoing intensification of land use within a wider historical and political context, which has its origins in the Green Revolution during the cold-war period, intersecting with the rise of anticolonial and ecological resistance movements.

Our goal is to engage with the ongoing ecological, social, and political struggles taking place in the region, while learning from the different modes of knowledge and situated perspectives of local stakeholders: farmers and exploited rural workers; scientists and architects; affected populations and activists. Combining architectural tools of spatial analysis with the voices and claims of those inhabiting the frontline of monocrop cultivation, the studio aims at producing a meaningful contribution to new forms of resistance, above and below ground. 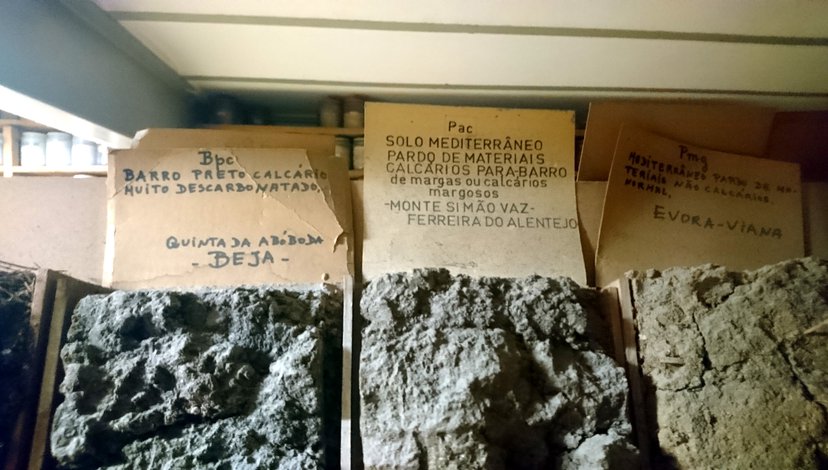 Soil Samples of Alentejo at the Institute of Agriculture ISA, Lisbon. João Ruivo 2021

We will mainly focus on the toxic relation between irrigation and environmental degradation: how does water produce the desert? And what is the impact of monoculture in the pedological processes which contribute to the destruction of soils?

Upon completion in 2002, the closing of the dam’s floodgates generated the largest artificial water reservoir in Europe, radically altering the semi-arid landscape. In the aftermath of the flooding, it is estimated that over 1 million trees were felled, including many protected areas of Montado ecosystem. But the arrival of the water also led to an increase in chemical inputs, placing the entire ecology of the region is under pressure. Not only a direct loss of biodiversity caused by rising toxicity levels, also vernacular forms of production and empirical knowledges, reliant on the foraging of non-cultivated species, which are labelled as weeds to be eradicated under so-called modern agricultural taxonomies and methods.

On the other hand, local activists, scientists, and populations, argue that the problem of water scarcity was hardly mitigated with the flooding of the basin, since intensive irrigation accounts for 87% of all water extracted from the dam. As a symptom of the now irreversible pattern of climate change, scientists predict that the number of days exceeding 45º will triple in the coming years, a phenomenon observed also in other regions in the Mediterranean basin. These climatic models do not align with the proposed expansion of the irrigation perimeters currently underway, which will require a further increase in water consumption. Despite reports sponsored by agrobusiness arguing that precision agriculture is less harmful and water intensive than traditional modes of production, water scarcity is already a source of conflict between populations and local authorities in the south of Portugal.

But the environmental crisis also triggered the emergence of organised struggle: from the long plains of Beja in lower Alentejo to the coastal region of Odemira, citizens, activists, and workers, protest the endless expansion of irrigated monocrop fields, greenhouses, and photovoltaic parks. Our studio will join them in denouncing the ongoing ecocide, while experimenting with environmental architecture as a tool for engaging in the design of critical alternatives, and ultimately as a medium of political resistance. 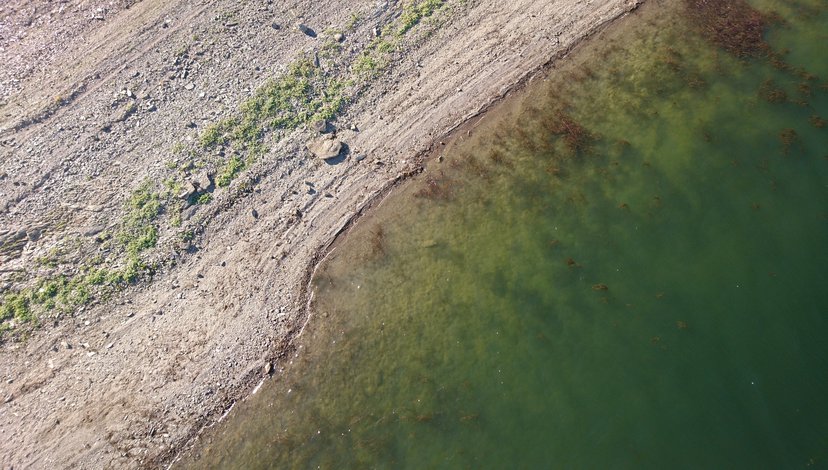 The ongoing desertification of Alentejo remains both a consequence of the concentration of landed property and an expression of its colonial continuities. Although finished in 2002, the project of the dam spans decades of political transformation. The first feasibility studies were ordered under the dictatorship, in simultaneous with other large-scale colonial projects for hydroelectric power in Angola and Mozambique; the decision to start building followed a bilateral agreement for the management and planification of hydraulic resources in the Iberian Peninsula, signed in 1968 together with Spain, at the time also under a fascist dictatorship. This period also coincided with an increase in political repression, both in the metropolis and in the colonies, where anticolonial resistance movements were leading multiple struggles for independence. At that time, Alentejo was considered the “bread basket” for the nation, and its landscape and soils suffered with the mechanisation of agricultural labour and increase of chemical inputs, leading to a decline in soil fertility, and an exodus of rural populations. But after the mass migrations of the 60’s, the region is faced once again with the threat of irreversible decline. Vague promises of employment and local development, a condition for accessing public and EU grants, have been recently shattered: against the government’s claim that the intensification of land use would contribute to reverse ongoing depopulation, a recent census has shown how Alentejo is one of the regions that has lost the most population over the last ten years.

In the second year of the project, we will build upon the networks of collaboration established in the previous year with local activist movements, Chão Nosso, Movimento Alentejo VIVO, Associação Ambiental Amigos das Fortes, Associação SOLIM. Embracing what philosopher Isabell Stengers termed an ecology of practices, we will learn from the different modes of knowledge and situated perspectives of those actively resisting the harmful effects of intensive cultivation.

These include the claims and experiences of local farmers and affected populations, scientists, and activists, with whom we will be engaging in dialogue and cooperation. In dialogue with the different stakeholders, our work will be twofold: on the one hand, the production of an overall image of the ongoing destruction, an analytic view from above, which comprises of a cartographic reading of the environmental changes derived from the shift in modes of production. On the other, a view from the ground: by engaging with the multiple perspectives of those affected directly by intensive cultivation. These include complaints by individuals and groups of citizens, living in the toxic proximity of monocrop fields; and anonymous complaints by migrant workers, who have denounced hidden cases of abuse and violence taking place out of public sight.

The olive harvest, a seasonal labour performed in many cases as a supplement to other modes of life, was also an important locus of sociality for women. Currently, agricultural labour is performed mainly by migrant male workers, often living in precarious conditions that only due to the pandemic were brought to the public fore. Their otherwise silenced voices spoke of what they left behind: many were already farmers, who sold their land and animals to afford the costs of traveling, and currently subsist in a chain of perpetual debt under the watch of human trafficking networks.

Despite agrocorporations’ claims of compliance with health and safety regulations, the experience of inhabiting next to a super-intensive olive grove cannot be fully measured or quantified. The voices of those who feel the plumes of aspersion entering through their windows on a regular basis, and how their lungs, throats and eyes suffer from chronic irritation, and other similar claims are constitutive of the experience of living in the frontline of modern monocrop cultivation.

The main objective for the studio is to build upon the foundation work developed during the first year in close collaboration with our local partners. Our approach evolves from the meeting of the different interests and practices of the group: therefore, we will work across multiple mediums, combining analogue and digital mapping, photography and moving images, physical and digital modelling. By engaging with ecological struggles in Alentejo, we aim at generating research and design outputs that can effectively be mobilised as tools for resistance.

In the first term, students will work in groups of 3-4 with a range of materials including scientific reports, oral testimony, film and audio recording, both existing and to be produced in conversation with the work from the previous cohort. Ahead of fieldwork in Alentejo, each group will produce a Field Manual, a research tool to be tested in the field trip. In Alentejo, we will meet with our local partners, and together with them, establish contact with affected populations, scientists, and agricultural workers. Acknowledging human and more-than-human perspectives, we will explore different forms of sensing and recording embodied experience and testimony.

At the end of Term 1, building up on the research insights and materials gathered in the fieldtrip, each group must compile the first draft of a Research Archive, to be delivered in the format of a A4 booklet.

In the second term, we will work from the vantage point of the current struggles taking place in region, and address situated claims of populations and workers who inhabit the front line of intensive cultivation. Whilst transitioning towards the Individual Research Project, students will continue working in group, and focus on specific case-studies derived from current environmental complaints deducted in Term 1. At the end of Term 2, each group will deliver the finished version of the Research Archive book, together with a first draft version of the Individual Research Project, format to be decided according to the projects.

In the last term, students will focus on developing their Individual Research Projects, working either in groups or individually. The work will build towards the Public Presentation of the work at the end of year. Final deliverables will include an Exhibition Installation accompanied by a research booklet for each project. 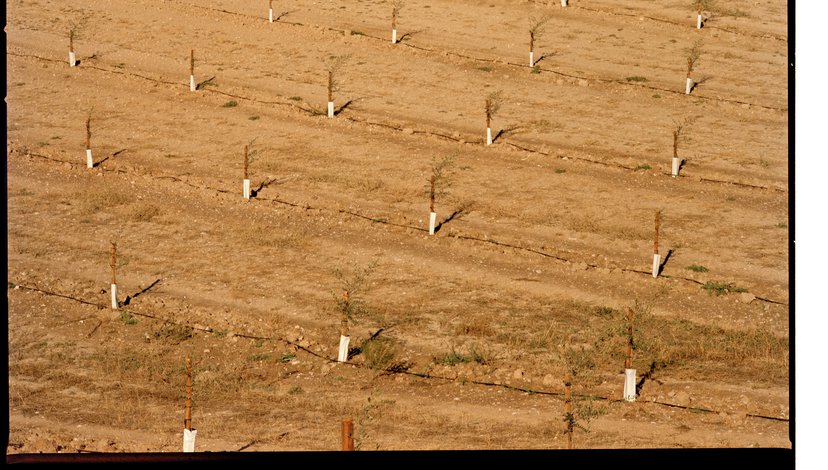 RS3 is led by Joao Ruivo and George Ridgway