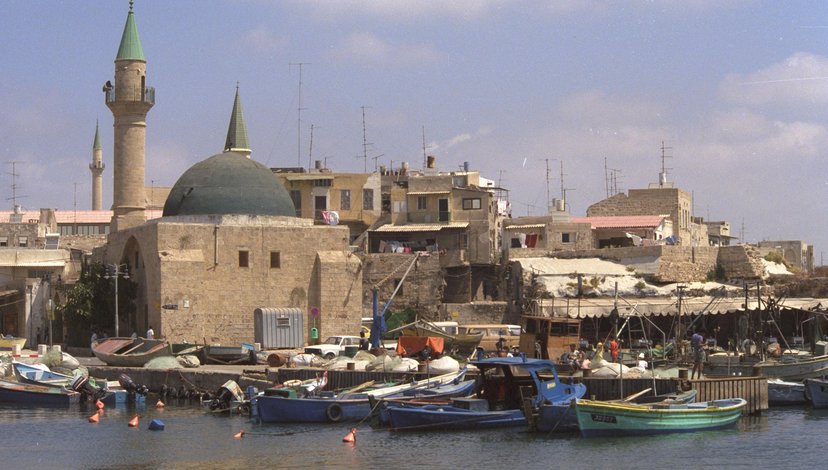 The studio posits heritage sites as sites of urban struggle and those that are weaponised for settler colonialism and occupation. Archaeological sites, and sites of cultural heritage, are generally understood as frozen in a moment of ruination. By highlighting those spaces as living and breathing landscapes today, and questioning the value systems and assumed linear time embedded in the classics and archaeological discourse, the studio embraces a delinear and decolonised methodology in order to contest the prevalent instrumentalisation of archaeological sites.

This year, the studio case study is the city of Akka (Acre) in 1948 Occupied Palestine. The city is following a pattern present in much of Occupied Palestine, where Israeli developers along with large donors, work together to dispossess Palestinians from their homes, with the vision of turning the properties into valuable boutique hotels for Israeli and foreign tourists. Located on one the most beautiful coasts in the Mediterranean, Akka, known as the Key of Palestine, was historically one of the most important cities in the region. Akka sits on 5,000 years of history colonised by the Romans, Ottomans, Crusaders, Mamelukes, Byzantines, and British, and today under Israeli occupation. The ground is hollow with water infrastructure audibly running beneath the stone tiles and Mediaeval tunnels run beneath the city once connecting the Templar’s palace to the port . At one point, the port of Akka functioned as the largest port in the

Despite the repeated and forced dispossession of Palestinians from Akka through economic disparities, and strategic government planning, there are groups of Palestinian youth that organise on the ground. We will be working with the volunteers as our partners to support them in their goal to map the forced dispossession and gentrification of Akka, and to find ways of disrupting what we can when we can. At this stage, there are only 355 Palestinian homes that remain in the old city. It will not be inconceivable to count 100 in the next ten years unless the tides turn.

Conceptual framing of time and maps

Linear time assumes the deeper you dig, the older the strata, and usually the more valuable, especially when the extraction of objects from these sites align with nation-building agendas. Questioning this value system can happen in two ways; by restructuring, reshuffling, and confusing the strata itself by denying access; and by centring silenced voices on the surface in the present while imagining a liberated future.

Maps were a prerequisite for archaeological research, and a settler-colonial extractive entry point for colonisation. The studio aims to create new cartographic imaginaries through critical cartography and deep mapping in a bid to shift the politics of cartography.

The critical cartography and deep mapping methods undertaken in the studio will operate in two ways: The first, is through production of content and material that allows openings for intervention. The media used will include sonic, visual, textual, moving image, and object intervention. Workshops for each medium will be provided throughout the first two terms to allow for experimentation with material and process. Two, the content will be presented in physical and digital platforms to allow the collected content to grow with the long term vision of the studio. The students will define pathways of research and design that engage land rights policies, ecological freedoms, and alternative, as opposed to, religious tourism. The interventions embrace science and spirit simultaneously and are encouraged to harness potential forms of urban resistances and alternative forms of being towards a counter-hegemonic collective repair and liberation from below.

The studio will work towards collective knowledge building and embrace a collective mode of operating. The studio work will engage collaborations in physical and virtual platforms where the output of those collaborations is to be used towards a long term plan. This long term vision sets forth methods for making visible the manipulation of the ground for political gain. And further, the studio vision will put forth collective interventions that create concrete shifts in the understanding, both conceptually and legally, of archaeological space as a space of urban struggle and resistance.

Sites of cultural heritage in Palestine are never frozen in time, they are living and breathing urban spaces. As public space is impossible to carve within Palestine given the zoning laws imposed by the Israeli occupation, archaeological sites provide rare pockets of breathing room for children to play football, for teenagers to walk through tree groves in privacy, and for the elderly to establish popup shops for tourists visiting the sites.

Unfortunately these cities have been settler-colonial battlegrounds over the last century, weaponised to dominate land by controlling its historical narrative. Hundreds of sites within Palestine were excavated and looted repeatedly, where imperial and settler voices superimposed themselves over millennia of historical stratification, simplifying complexities and flattening out thick entanglements.

In so doing, the process of colonial excavation, which exploited Palestinian labour, mostly female, rendered Palestinian presence obsolete. Today, the settler-colonial Israeli state continues to weaponise archaeology as a tool for nation-building. Examples of how this is done include the role of the military archaeologist Hananiya Hizmi, the staff officer for the Archaeology Department of the Civil Administration (ADCA), the Israeli authority within the West Bank which illegally controls archeological sites there. The ADCA declares the archaeological sites as Israeli National Parks, creating a zoning loophole for further control. ADCA authorities, with the help of settlers, loot and displace artefacts from the West Bank, store them in military warehouses, or exhibit them in Israeli institutions.

They continue to legitimise the dispossession of Palestinians from their homes and businesses near and in the archaeological sites in Sebastia, Silwan, Akka and many others. Settlements are strategically built near and around biblically significant sites, as a chess move towards further land grabs and control of the physical terrain. Settlers terrorise the ecological landscape itself by setting fire to Palestinian agricultural fields surrounding the monuments, cutting down trees, and leaking toxic waste in the valleys. By controlling the archaeological past, the state and its agents legitimise continued colonial expansion in the future. 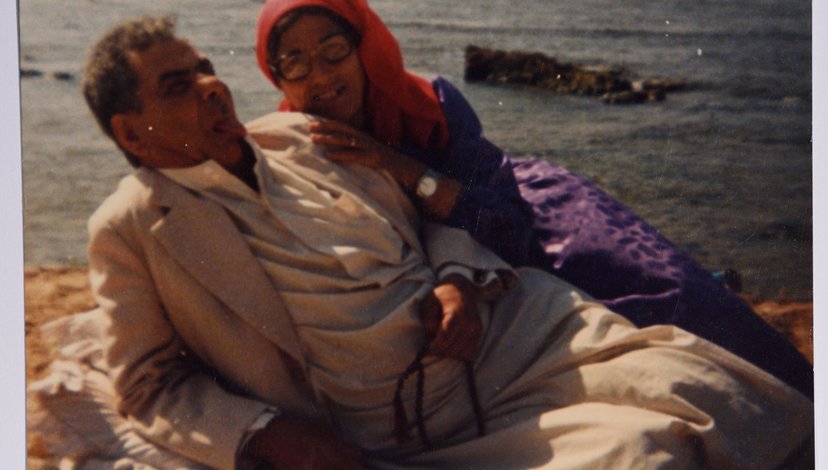 The studio strives for a truly collective methodology where students will partner with specific NGOs and individuals in Palestine by working directly with them to produce work that counteracts the practices of oppression on the ground. The methodology of the studio therefore strives to not replicate the extractive practices inherent to archaeology and approaches the Palestinian community with true partnership through a process that is not transactional but mutually beneficial – centring Palestinian claims for land. In addition to collaborations with constituents in Palestine, the methodology embraces collaborations with multiple experts in their field that are situated at the RCA as well as those that are part of a wider network (listed below). This can include individuals and groups working in film, music, model making, casting, ceramics, glassblowing. A full list of potential and previous partners is listed below.

The entry point for the studio is through the lens of critical cartography and deep mapping that aims to contextualise the history of colonial mapping practices, and approach these new cartographic imaginaries as a form of evidence and decolonising interventions.

In the first term, the studio is to focus on capturing lines of flight, moments of rupture, and to identify possible sites of intervention that can invent new space-times for the ground. Initially, the studio will cultivate a web of relationships and cross-pollination between disciplines, humans, and nonhuman constituents that will be negotiated through forms of care, kinship, and true collaboration. These will include archaeologists, rocks, farmers, plants, anthropologists, artefacts, musicians, sound artists, sounds, business owners, footballers, and storytellers.

The studio will then challenge the weaponisation of archaeological sites as battlegrounds for colonisation and occupation in Palestine today in close partnership with those constituents by identifying potential sites for intervention. This evidentiary collection will be harnessed virtually and designed to be in constant progression on a living and breathing website dedicated to the studio. The website will be launched at the end of the first term and will continue to grow through the studio’s progression over the years to uplift the knowledge production over each year.

In the second term, the studio will organise with constituents by producing interventions that move beyond architectural prosthetics, or quick repairs, bringing together modes of production as a form of political praxis that bypass the prosthetics of the state, and seek to suggest an alternative space of solidarity and other potential imaginary possibilities.

The interventions can be produced through multiple media and techniques, with sonic, visual, and textual interventions all being considered as valid forms of production. Examples of deep mapping interventions can include evocative objects, time capsules, revolutionary films, sonic accounts, and speculative textual works. The site-based research studio contributes to urban practice through an earth-based methodology that centres experimental intervention as a powerful tool in imagining a decolonised and liberated urban landscape.

By the end of each year the studio cohorts should aim to answer the following questions:

Term I & II: (Group) What are ways in which we can harness data to intervene in the weaponisation of these sites?

Term III (Independent) What alternative urban futures can we generate through the production of radical interventions, or object, image, and sound, and textual works? 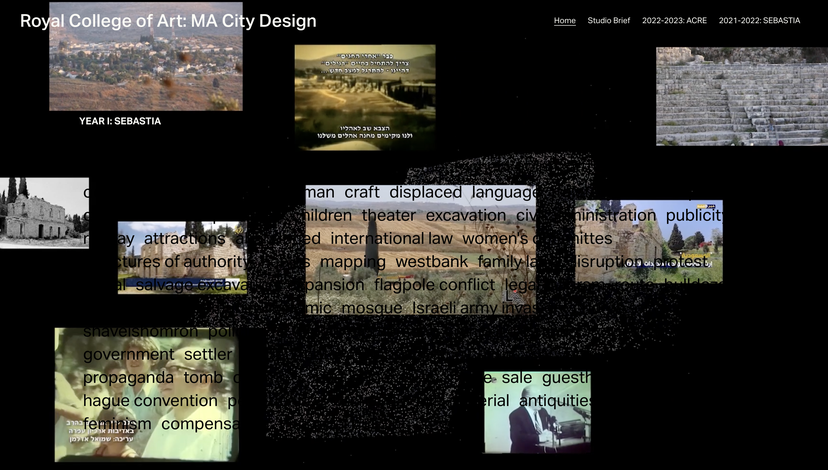