Dani's cleverly designed device is attached just below your little finger and controlled by sensors attached to your big toe. A study undertaken last year by the Plasticity Lab at the UCL Centre for Cognitive Neuroscience saw participants trial the invention for five days, with findings showing that the thumb temporarily changed how the user’s hand was represented in the brain.

Now a Senior Research Technician and Head Designer at the Plasticity Lab’s new base – the Cognition and Brain Sciences Unit at the University of Cambridge – Dani is about to embark on the biggest study of the robotic augmentation of the human hand yet. 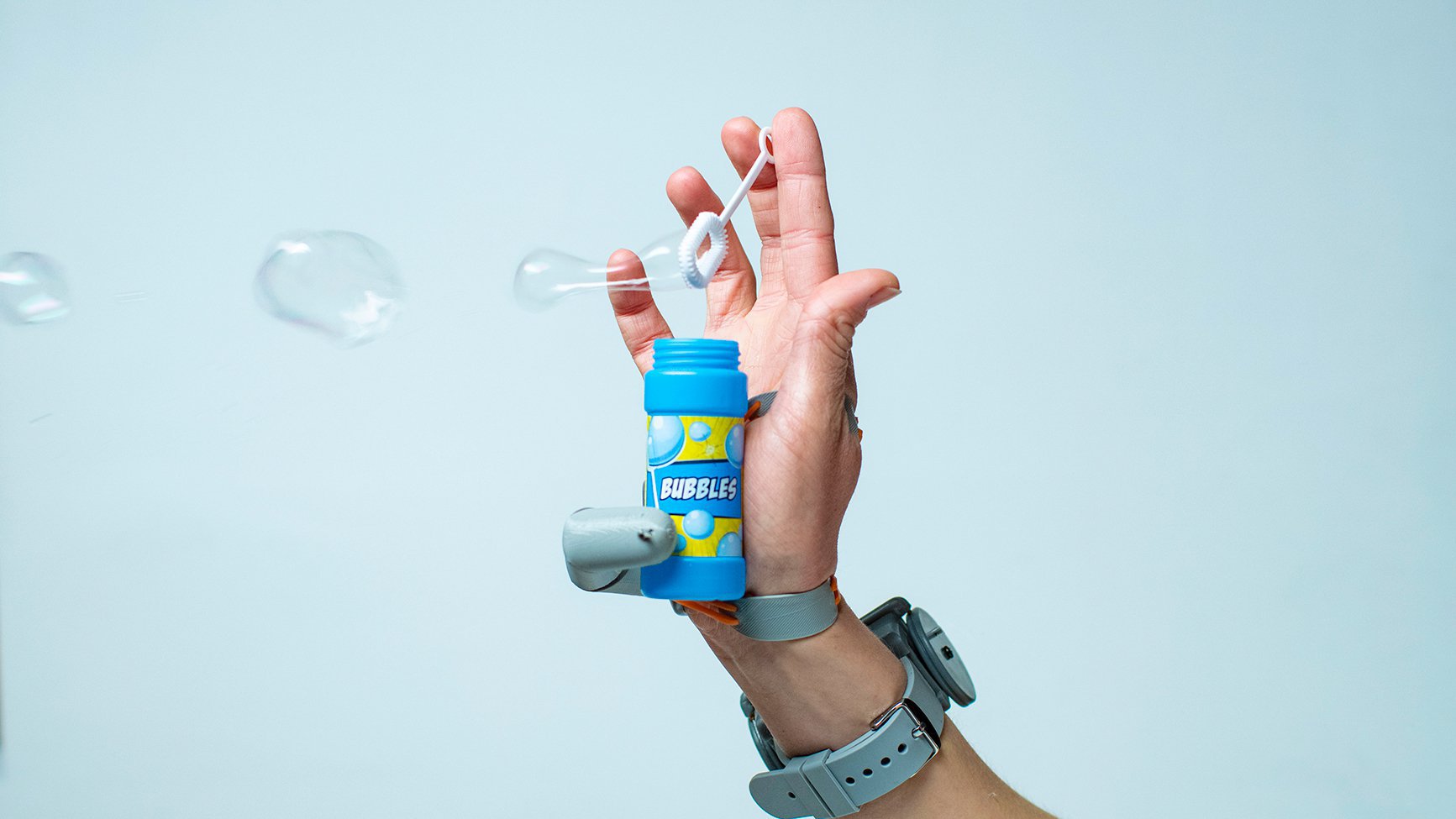 How did your ‘Third Thumb’ project start?

Prosthetics are such unique products; it is a human-to-product relationship that is unlike any other. I wanted to explore the connection that evolves between the wearer and the limb, so I developed the design to be experienced by anyone as an extension of the body. And I thought it would be great to use my time studying MA Design Products at the RCA to expand on the product relationship and experience it for myself.

The project has evolved with my research collaborations at UCL, I have been able to design 'Third Thumbs' for so many different types of hands – and the basic underlying design hasn’t changed that much since my first RCA prototype.

The questions I always get asked are – is it a prosthetic? Does it replace a missing thumb? Or is it augmentation? My answer is ‘it's both’. It just depends on where you put it, who you put it on and your perspective of that person or how they view or define themselves.

Why did you decide to study at the RCA?

Growing up in New Zealand, I always wanted to do my MA overseas, to push myself a bit more. During my Industrial Design degree at Victoria University in Wellington, we were constantly inspired by who was designing what, and why it was so good, and I just kept seeing the RCA pop up again and again when I looked at where they had studied. So it became my goal to get there.

Then I met my wife while in Wellington, she’s from the UK and wanted to head back, so London just made sense. I shopped around a bit, but I knew my sights were set on the RCA.

“Through seeing how our brains adapt to augmentation, we can explore the boundaries of neuroplasticity – finding out what resources our brain uses to control a body part that has never been there before.”

How did your work with brain scientists at UCL come about?

Surprisingly, they approached me! Tamar Makin and Paulina Kieliba were looking for technology collaborators for neuroscience research into ‘supernumerary digits’ – exploring how the brain would respond to an additional limb.

They saw the 'Third Thumb' online just after it got some press from the RCA graduate show and asked me to come in. Then they all tried it on and got really excited. They said it was very different to what else was being developed in the supernumerary field and asked if I’d like to collaborate. Four years on, we’re about to start our third neuroscience study using functional magnetic resonance imaging (fMRI) and the 'Third Thumb' as a training model to explore the brain’s ability to adapt to augmentation.

What did you and the team of brain scientists at UCL want to find out with the study?

What we wanted to find out is whether it is possible to merge technology with the human body. Augmentative technologies are advancing so rapidly, with designers and engineers creating extra digits, hands and even whole arms. These devices are amazing, but what we still don’t know is – can the human brain support an extra body part? And how would using that extra body part impact the control of our biological body?

Our first study just published in Science Robotics was the longest full fMRI robotic augmentation study ever done on the human hand. We trained participants to use the ‘Third Thumb’ over five days and looked at how learning to use this new body part affects neural body representation. This is the first time a study has allowed people to use an augmentative device outside the lab to see how an extra thumb changes the way people use their hands – we see these changes in the brain itself.

“The success of our initial study shows how valuable it is for neuroscientists to work closely with designers.”

Did the findings give any new insights into robotic augmentation?

We found people quickly learn how to control a robotic augmentation and use it to their benefit without overthinking. But there is a trade-off. In order for people to use the augmentation efficiently, they had to change the way they use their biological digits by creating new movement synergies. This updates the way their body is represented in the brain.

This is a very important message for everyone interested in safe and successful motor augmentation – it may incur changes to how the brain represents our bodies – and we need to better understand these potential changes for future augmentation design.

Did participants in the study actually experience sensations in the prosthetic when wearing it?

Yes, we had high levels of embodiment of the device from our participants. It was always important to me that the 'Third Thumb' be wireless – this made it possible for the participants to take the Thumb home everyday after their lab training session. I think using it in their own space really helped with embodiment levels and thereby increased their ability with the Thumb, which we saw in the brain scans.

People became really attached to it across the week, I was actually quite surprised. One girl needed a moment to say goodbye to it, another named it and some didn’t want to give it back. It was fascinating and quite a nice compliment.

Could the ‘Third Thumb’ device be used to help people in the future with their everyday lives?

There is so much to discover when it comes to augmentation in the brain. Through seeing how our brains adapt to augmentation, we can explore the boundaries of neuroplasticity – finding out what resources our brain uses to control a body part that has never been there before.

We’re just about to start our longest study to date, with participants wearing the Thumb longer than in our first study, as well as using a version of the ‘Third Thumb’ I created that is MRI safe, so we can actually scan the participants’ brains whilst they are using it – rather than afterwards. We want to find out how robotic augmentation alters the brain’s image of the body to make sure people will still be safe to carry out everyday tasks like driving. We need to make sure that future devices are safe to use, even after the user takes them off.

The success of our initial study shows how valuable it is for neuroscientists to work closely with designers. The upgrades I made to the 'Third Thumb' design during the research phase were very much influenced by the study, which I was part of daily, and equally the study was influenced by the physical design of the Thumb. This kind of collaborative research needs to happen more to ensure future augmentation devices are safe and make the most of our brain’s ability to adapt.

Find out about MA Design Products