Textiles wasn’t my focus when I first went to Medway College of Art, I just always liked art. I thought at that time, possibly, that I’d go into something like book illustration. In your first year at Medway you’d be put through all the paces of the different courses – you’d do a bit of lino cutting, a bit of sculpture, painting. I was taught by a woman called Barbara Brown, who was an amazing teacher and very enthusiastic. She told me that if you really want to get anywhere with textile design, you had to go to the Royal College of Art. Right from my second year at Medway we were working towards getting a folder suitable to get me into the Royal College of Art. They only accepted 12 people a year back then, so you had to become one of those 12.

It was difficult for the first term at the RCA, living away from home and working with a lot of students that weren’t necessarily friendly. I remember saying to one girl, “I’m really stuck on this design, what do you think I should do?”, and she said, “I don’t care”. And I was terribly upset that someone wouldn’t even pretend that they might be interested! That was part of one’s education.

Once you get to the Royal College the teachers aren’t necessarily teaching you, they are guiding you, and would come up with suggestions. I found it very difficult in my first term, but then I gradually got into it and enjoyed College life. 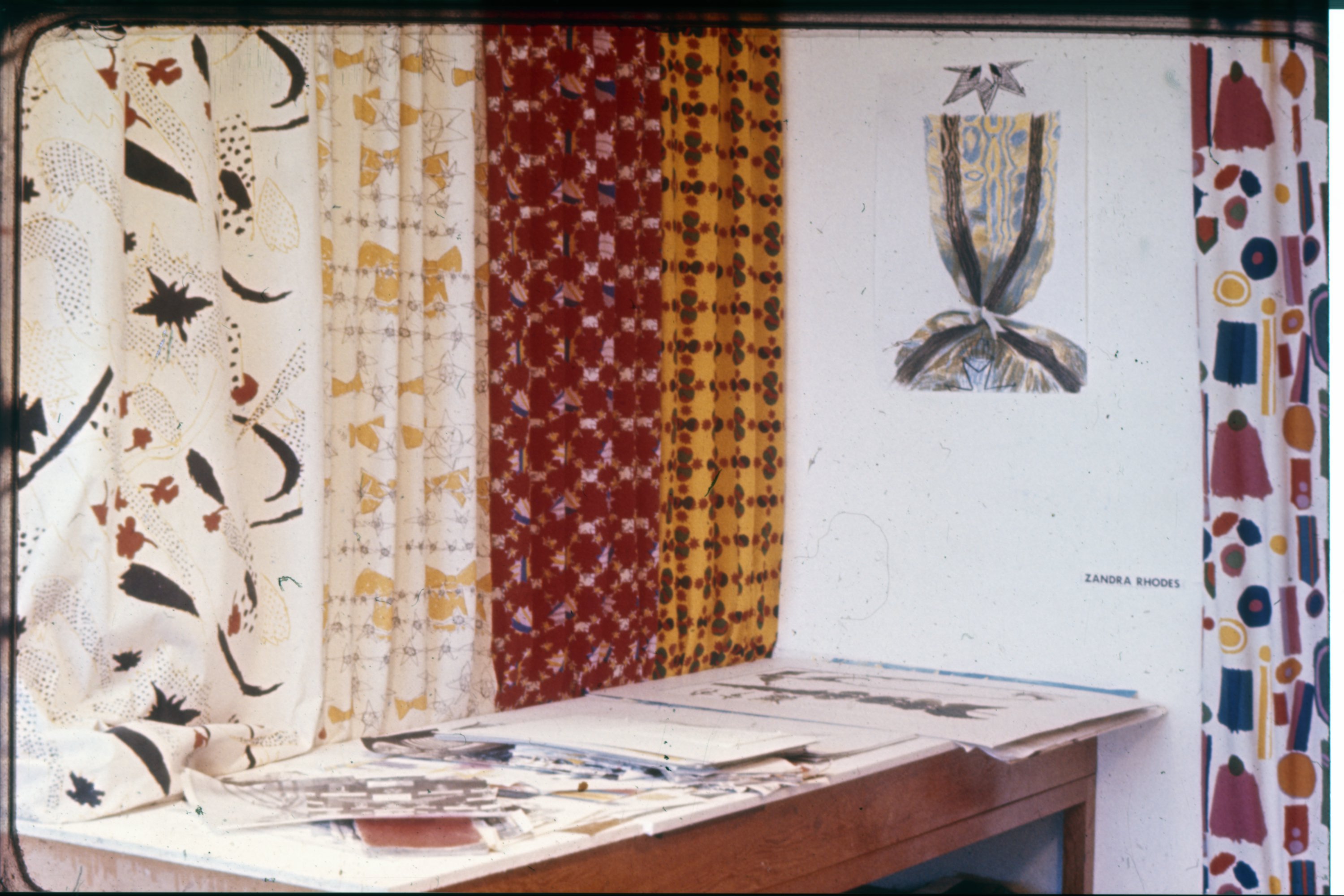 My whole life was being at the College, I went in six days a week, they closed on a Sunday in those days. I more or less lived there. I went in usually at around 7.30 in the morning and left when we were turned out at 10 o’clock at night. There were a group of us in those days that used to be working there in the evenings. It was fun, some of the people in the year ahead of me, they used to be singing and drumming around. It was a very lively time. When the Rolling Stones appeared at the Royal Albert Hall, we had a magical key to the office at the end of the building and we could look out the window to see them going into the building.

I suppose my breakthrough came in my second year. I would always try and see what other departments were doing and would take short cuts through the studios. Janey Ironside was this very glamorous head of the fashion department, and I’d go up there to see fittings and things like that, which were very exotic. I started to think of doing prints to be used in the fashion show. I’d never thought that I would go into making dresses. I assumed that I might make a living selling my prints and that I’d teach two days a week. I hadn’t calculated that I would hate teaching!

“In those days people would say ‘You’re a textile designer, you can’t design dresses’ but there wasn’t much choice, because no one was going to buy my prints, so I wanted to make them into the sorts of dresses that people might believe in. When I look back, I think, I don’t know how I did it!”

There were some really exciting people at the RCA when I was there – Norman Ackroyd, Derek Boshier, Roland Piché in sculpture and David Hockney was in his third year when I started. At that time I didn’t personally know David Hockney or Norman, I just saw their work and their exhibitions. Norman happens to live opposite to me now, which is just wonderful. I’m going on a sketching trip with him and Christopher Frayling when we can travel.

The tutors were wonderful. We had Humphrey Spender, and Roger Nicholson was the head of the department. Dicky Chopping, John Drummond, Peter Rice (Pat Albeck’s husband). I got to know some of the members of staff really well, which was lovely. I stayed in touch with quite a lot of people at the College.

For your final year you had to choose what was called your major task. I was very influenced by a painting David Hockney had just done of generals with their medals (A Grand Procession of Dignitaries in the semi-Egyptian style, 1961).  So I chose to do medals. The medal print got bought by Heal’s that year, and I did a whole lot of drawings with medals. I think that was really the birth of my work, and I was printing it all there at the Royal College.

At the end of my last year I went to see two designers, Foale and Tuffin in Carnaby Street. During that summer holiday I learnt all about getting fabric converted. I found a printer, who printed and delivered it to Foale and Tuffin to make dresses from. I did that for about two years after I left College.

Through being at the RCA I got my two days teaching job – one day a week at Ravensbourne, and one day a week at High Wycombe. While I was teaching, I met another ex RCA student, called Sylvia Ayton, and did prints for a collection we did together. We met Vanessa Redgrave and she backed us to have a shop with another RCA girl who’d been in the photography and television school, Annette Green. We founded the Fulham Road Clothes Shop, which stayed open for one year only – it was in the wrong part of London – but during which time it got lots of publicity. 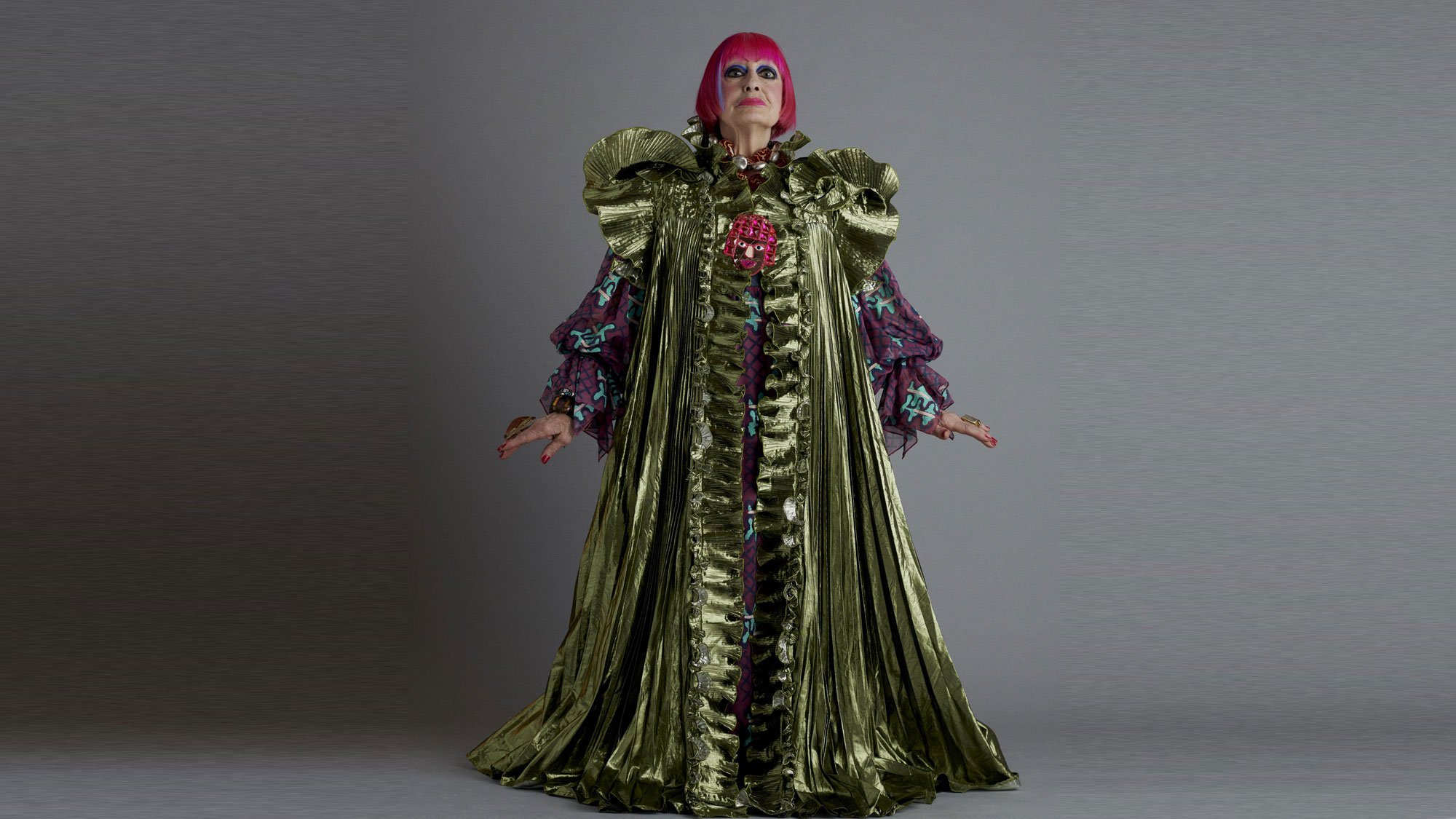 I was left with no job when the shop shut. I’d met these two wonderful mad Ukrainian American hippy type models, and they said to me “you must come to America, you’ll make your fortune”. Now, why one listens to some of these things, I haven’t got a clue, but I made a collection and I went to English Vogue and they gave me a letter to the head of American Vogue. There was also a very nice girl who worked for Women’s Wear Daily and she wrote a whole article about me. So I went to America and made the front page of Women’s Wear Daily, and Diana Vreeland, the head of American Vogue, photographed my things on Natalie Wood the film star, and introduced me to the top shop in New York, and I started to make clothes!

In those days people would say ‘You’re a textile designer, you can’t design dresses’ but there wasn’t much choice, because no one was going to buy my prints, so I wanted to make them into the sorts of dresses that people might believe in. When I look back, I think, I don’t know how I did it!

You never know the quirk of fate that turns one round. It’s been quite an amazing experience. And I’m lucky enough to still be doing textiles, I’ve got a whole range coming out in September 2021 for Ikea. It’s been wonderful.

This interview was originally commissioned and published in the book The Perfect Place to Grow: 175 Years of the Royal College of Art.

Graphic designer Margaret Calvert on her long-standing relationship to the College.

Artist Tracey Emin CBE, RA (MA Painting, 1989) on her time at the College.

Artist and RCA alumnus David Hockney OM CH RA (ARCA Diploma Class I Painting, 1962) on his time at the College.