The Palace That Joan Built is a multi-part installation and series of performances exploring and unpicking the legacy of “the Mother of Modern theatre,” Joan Littlewood.

The project was commissioned by Art on The Underground and Theatre Royal Stratford East, and co-authored with composer Gwyneth Herbert. The work centred on production of an episodic musical documentary film echoing the agitprop theatrical form of a Living Newspaper, titled 'The Palace That Joan Built' which was installed in the mezzanine at Stratford Station, London, as part of an architecturally scaled installation for 21 months.

The project launched in 2015 at Stratford Station with a 4-hour rolling performance on the central concourse. An album of 8 collaboratively composed songs were performed by a 40-piece brass band (East London Brass), 20-person community choir (Upbeat) and Herbert’s own 5-piece ensemble.

A variety of practitioners representing theatre, visual art and music were also part of the non-hierarchical flexible creative framework developed in support of production. Scores and arrangements were repeatedly painstakingly revised in response to the technical ability of our participants, enabling best performance and a strong sense of collective ownership. Over 200 participants from community groups directly performed as part of the project’s ensemble, contributing to a celebratory yet politically and critically astute work of contemporary art.

The project has been made available to a large and broad audience over the 21-month installation period at Stratford Station, through the four public performances (songs and film screening). 1000-run publication, downloadable e-book, album and project archive on the Art on the Underground website. Other screenings and theatrical performances of the work took place at the Picturehouse Cinema Stratford and Theatre Royal Stratford East as part of the national celebrations surrounding the centenary of Littlewood’s birth.

“The artists examined Joan’s own writings, academic texts and scripts from Theatre Workshop, Littlewood’s company who adopted Theatre Royal Stratford East as their home between 1953 and 1979. They spoke to her colleagues and collaborators and explored the creative and dramatic heritage that influenced her own directorial work.” 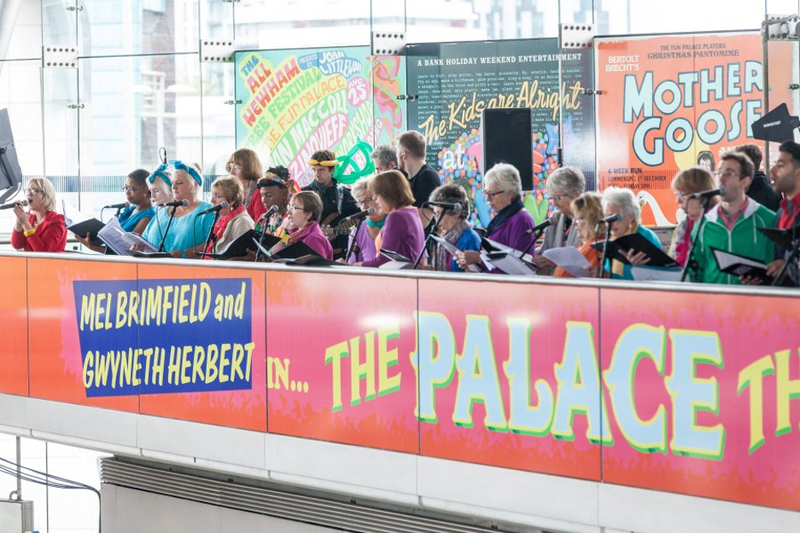 Find out more about A Joan Jamboree.

The research process and form of the final work is structured entirely in response to Littlewood’s credo of making theatre with and for the community, without compromising intellectual and artistic integrity.

Extensive workshops with Newham schools across the borough and as part of the Theatre Royal’s Young People’s Work programme, and at the National Theatre Studio in association with the Live Art Development Agency all fed directly into an active process of consultation, and testing and reviewing her methodologies both theoretically and in real production situations.

Similarly, extensive interviews with leading Littlewood scholars and academics in the field of political theatre, and her surviving friends, colleagues, archivists, company actors and the current Theatre Royal team are directly represented in the outcomes.